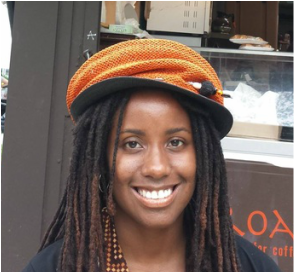 MONICA CARRILLO ZEGARRA, (www.oruperu.com)  an Afro-Peruvian  writer, poet, singer, musician, community leader, journalist, human rights advocate, and feminist  working with her organization LUNDU Center for Afro Peruvian Studies and Advancement  to empower her community, especially with Peruvian young people and children that live under poverty . Carrillo was the co-redactor of the “Youth Declaration Against Racism” in the World Conference of United Nation Against Racism (South Africa 2001).
Monica Carrillo designed and managed more than 30 projects of human rights for Afrodescendant people and political campaigns against racial discrimination. She led the first legal process through which the Peruvian government sanctioned a TV Channel for a racist show.  She created the “Afroperuvian Observatory of Mass Media” which has analyzed more than 11,000 print editions of newspapers.  Her job is a subject of thesis and academic papers in prestigious universities around the world as Yale and Harvard.
Carrillo, who goes by the name Oru, creates poetry that mixes afro-beat, hip-hop and Afro Peruvian music to bring attention to the ongoing effects of racism, sexism, homophobia and lesbophobia.  Her production “Monochrome” included a CD, a book and a performance with 8 musicians and dancers and has been featured on MTV Europe. Her poetry was translated in Catalan and German and it is a subject of academic studies by universities of Italy, Chile, Argentina, Brazil, Canada, Peru and academic programs such as Erasmus (European Union). She has been advisor of undergraduate and graduate students of NYU, Chape Hill, British Columbia, SIT (School for International Training)
She rang the Bell in NASDAQ in the International Women Rights Day (2007) and she was a keynoter with the Hollywood’s actor Richard Gere in the Gala “Invest in Women” hosted by IWHC. She has given conferences in Harvard, Columbia and around the globe. Carrillo is the recipient of the recognition of Google in the “Human Map” and she is in the category “Peru” in The Google Earth Map.  She was the image of the campaign “Every Human Has Rights” of the organization The Elders, founded by Nelson Mandela and Desmond Tutu andCarrillo was honored by Rutgers University with 16 women around the world who standout in the fight against gender violence. Her job was featured in PBS, Univision, Aljazeera, BBC, CNN, Radio France International, New York Times and Amsterdam News.

Karen Juanita Carrillo
IShe has worked as a journalist for more than 15 years, and presented lectures on African American and Afro-Latino issues. Carrillo co-wrote the chapter, “Brutality Against Prisoners is a Serious Problem,” which appears in the book Police Brutalityedited by Tamara L. Roleff (Greenhaven Press, Inc., 1999) and the chapter, “Our World, Our Work” for the book Body and Souledited by Linda Villarosa (HarperCollins Publishers, 1994). In 2002  she was awarded the National Newspapers Publishers Association's "Perspective Reporting Award:  For human-interest coverage of the impact of September 11th, highlighting diverse perspectives in African American communities."  In 2003, she was a New California Media Awards winner in the "Civil Liberties" reporting category. In 2005, she received the New York Association of Black Journalists' first prize award for "General/Spot News" reporting and in 2008, she won the NYABJ's second place prize award for "International News" reporting.
Karen Juanita Carrillo is a United Nations representative and senior researcher with the International Oil Working Group (a non-governmental organization).  Her published articles and photographs have been featured in numerous publications in the United States, South America and Europe.
Lisa J. Scott, PhD. focuses her research on analyzing how to best aid in the healthy sustainability of disparaged communities created by situational poverty.  Dr. Scott does this by examining health issues and its relational impact on our educational systems and community.  Her interdisciplinary graduate and post-doctoral training have sharpened her understanding of the intricate relationships between various micro and macro experiential factors relative to the development of people of color and migrant families.
Dr. Scott's recent publications include The Impact of Community on Schools: Teachers and Parents Speak Out (through Erlbaum Publishers, 2007), Multicultural Issues and Literacy Achievement(2006), Review of the Life of John Ogbu (2006), The role of social capital on Jamaican immigrants and their economic mobility(2005) among others.